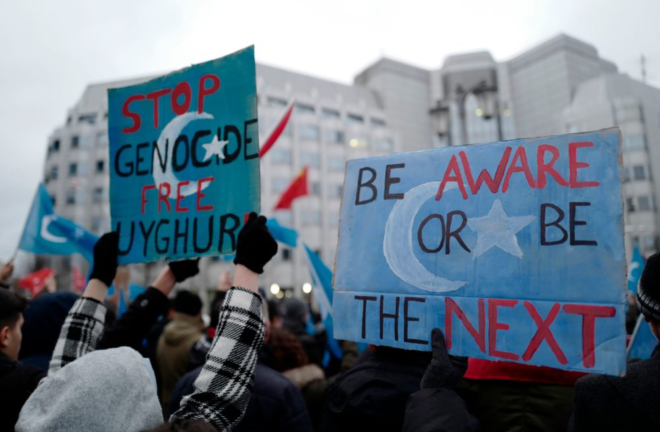 Uyghur Muslims in Xinjiang, China are being held in concentration camps against their will since 2018.  So far there are a total of 380 detention camps. 2 million Uyghur Muslims have been detained and are trying to escape this madness.

Unfortunately, when you turn on the local or national news it’s not being talked about a lot.  Not many people are aware of these facts. Now is the time for the world to pay attention to innocent Muslims being imprisoned, tortured, and killed.

In 2014, the Xinjiang government restricted fasting during the holy month of Ramadan. This ban created even more tension between two groups that didn’t always get along, the Muslims and the Chinese government. Xinjiang eventually became so fed up with the Muslims, they held them captive in concentration camps. The government wanted to change their religion and culture.

The Chinese government forces Muslims to eat pork, drink alcohol, and says cruel things about their God. More than 80% of the Muslim population has been killed in China, according to the Byline Times article, Death is Everywhere (2020).

“As a part of the Muslim community and as a girl who wears a hijab, that’s a common thing that is seen as a threat to others”, Sarah Cheaito stated. “If I witnessed a Muslim woman or man being harassed, without a doubt I would try my best to stop it and stand up for them”, Sarah insisted.

Many Muslim women get stared at for wearing the hijab and feel automatically targeted by others around the world.  Maya Harb, a local Dearborn, MI advocate responded, “Over 60% of Muslims have to go through this every day, it is disgusting.”

However, the mistreatment of women in Xinjiang, China is steadily increasing.

Women are being forced to be sterilized by using a contraceptive called tubal ligation. Sterilization stops a woman from having children. According to CNN, the birthrate in Xinjiang had dropped ⅓  from 2017-2018, that’s a total of 120,000 children in 1 year.

Rahima Mahmut, a victim of sterilization states that she was forced by the Xinjiang government into being sterilized. Rahima was threatened with demands that could destroy her family. The government threatened to confiscate her passport. She was also under pressure that her husband’s visa would be revoked.

Numerous Muslims in Dearborn, Michigan feel this issue isn’t talked about enough. Dearborn Michigan has the highest amount of Arabs outside of the Middle East. Zakaa Hassan, a Dearborn citizen states, “Of course, this is a matter where the United States should  get in the way (involved) and do something about it, even though they probably won’t.”

China is continuing to expand their camps. The world knows what is happening and this is why the topic is so upsetting. I hope other governments will get involved and stop the unfair treatment of Muslims.

To conclude, what’s going on in China is wrong. The world’s racism problems are growing daily. Something needs to be done. I stand with Muslims, do you?