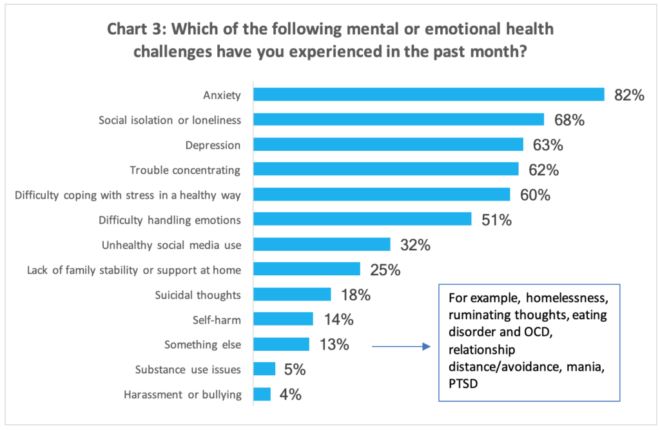 Achieving high scores is becoming a bigger aspiration for an increasing amount of American youth. Over 1/3 of adults in the U.S. population are currently receiving a higher education. With the rise of information technology and an increasingly global economy, higher education is also becoming more of a necessity for success.

With the success also comes excessive pressure and responsibility being put on students. These struggles include students’ mental health problems, which include stress, depression, anxiety, and other related problems.

Students’ mental health problems are more common than we think. According to Polaris Teen Center, Approximately one in five teens (aged 12 to 18) suffer from at least one mental health disorder.

For many students, mental health problems could begin as early as late elementary. Students can experience extreme stress and anxiety from the pressure of standardized exams and tests such as the NWEA, M-Step, AP, or the SAT. The pressure the students face is from teachers and parents alike, telling the students from a very young age that there is such thing as a failure even when doing your best.

Another cause of students having mental health problems occurs from helicopter parenting. Helicopter parenting is when a child’s parent controls every detail in their children’s lives. Which leaves students so burned out to engage meaningfully in their own life. It causes students to give up at the first sight of a challenge.

Even though every parent wants their child to be successful and wants them to have perfect grades, that’s not always an option. The extreme amount of pressure and guilt they put on their child, when they don’t get a perfect grade, is absurd. Parents then think that if they make their child feel bad about themself, they will try to change themself or try harder.

Some schools do not follow the child’s mental insurance of study, meaning some teachers assign things without paying attention to the fact that some students might not be able to keep up. This is a problem for many students because sometimes some students don’t understand and can’t comprehend the teacher’s learning style.

Leaving the student with the choice of stressing out and memorizing the information instead. College student, Fatme Attalah, states, “When I have too much work that I have to manage in such little time I get stressed out and I start studying faster than usual. When I do this I end up only understanding half of the information given to me and memorize the rest.”

Some students do end up going to a counselor, or someone they trust when they deal with mental health problems, but many students don’t receive help. Some students aren’t used to the fact that they have someone that they could talk to and will listen to them.

You’ll never know if somebody is experiencing mental health problems either. Even if you feel like you know somebody they might not tell you certain things because they might be scared of the way you’ll react.

Middle School Concealer Emily Bartley states, “ Probably a good portion of our students receive counseling, they wouldn’t openly discuss it with anyone because their parents or maybe even some of their friends look down on them for them having mental problems.”

Some people can tolerate more stress than others and some can´t. Middle school student Israa Khanafer states, “I have a high tolerance for stress but at a certain point I can’t take it. Too much stress can cause me to become distant from others.”

In conclusion, Mental health is a really important topic that gets looked over a lot. Many people have mental concerns from time to time. Some have it more serious than others. School is a really big cause of mental health problems; with all the stress and anxiety from assignments and pressure, many people end up dealing with these problems and not many people pay attention to that.

People need to realize that maybe even their own children are experiencing these problems and they just don’t know it. The real question Is school really breaking us making us at this point?