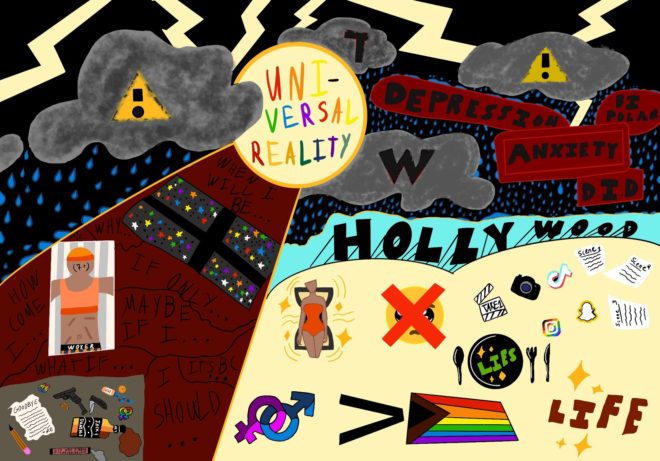 “To be yourself in a world that is constantly trying to make you something else is the greatest accomplishment.” quoted Ralph Waldo Emerson, an American essayist. This is the terrifying reality that has overcome the majority of our nation. There is an infinite number of reasons that contribute to anxiety and depression, none of which are as harsh as the stereotypes and expectations that are given to our generations. Everyone knows that we have to be the change we want to see, but in order to change we need to know what we’re changing.

What are stereotypes? There are varieties of answers to this question, but formally a stereotype is, “ a widely held but fixed and oversimplified image or idea of a particular type of person or thing,” defined by Oxford Languages.

Although there are hundreds, even thousands, of different stereotypes and expectations, the most common target the youth of our community. The most severe of these stereotypes are gender, racial, physical profiling, cultural assumptions, and grouping of individuals. To sum up what these mean:

Assuming something about someone by appearance

Labels about other cultures and countries

Grouping people and applying that they are a certain way

Stereotypes don’t define our society, but most of the time it can feel like that. This makes it harder for people to be themselves and avoid judgment at the same time. When people can’t be themselves, it gets to the point where it causes anxiety. According to ADAA (Anxiety and Depression Association of America), “Anxiety disorders are the most common mental illnesses in the U.S…”

Although there are many different forms of anxiety, it isn’t the only type of mental illness that can ruin the way you look at the world. When diagnosed with depression most people tend to forget the beauty in the world and go to this dark state of the mind.

Research from the NIMH (National Institute of Mental Health) along with data from SAMHSA (Substance Abuse and Mental Health Services Administration) showed that in 2017 “…an estimated 3.2 million adolescents aged 12 to 17 in the United States had at least one major depressive episode.”

This may not seem like much but one episode being the minimum is still excessive for that age span. Following up on the same report, it shows that “…adolescents aged 12-17…an estimated 19.6% received a health care professional alone, and another 17.9% received combined care by a health care professional and medication treatment…2.4% treated with medication alone…60.1% with major depressive episode did not receive treatment…”

Prescription medications are complicated compared to the stereotypes that eventually lead up to the need for that medication. All prescriptions come with different types of side effects but antidepressants take those to a whole new level of danger.

Mayo Clinic explained that even though “antidepressant drugs are often an effective way to treat depression and anxiety…” They then followed up explaining that the FDA (Food and Drug Administration) has a “black box warning”.

Most antidepressant side effects are nausea, an increased appetite, fatigue/drowsiness, insomnia, a dry mouth, constipation, dizziness, agitation/anxiety, and many more. These side effects are just from the drug itself. Kids and teens who take the prescription may feel even more insecure about themselves.

Stereotypes, standards, expectations, prescription medications, and mental health diagnoses aren’t the worst part of what is affecting our community. The NCHS (National Center for Health Statistics) conducted a data brief in May 2010. This research showed that between 1999-2006, suicide caused 11% of deaths in ages 12-19.

Our World In Data conducted a data brief in 2017. The research showed that in the top 5 leading causes of death, suicide was number 4.

Later in 2018, the CDC collected data on the leading cause of death in the United States. This data showed the variety of causes for different age groups.

This doesn’t just affect our community on a national scale. The number 10 cause of death in the state of Michigan is suicide.

So many people are at risk for suicide, we may often not know how to notice the warnings and offer our help to prevent so many tragedies. Another research by the NIMH elaborated on what suicide is and what the main risk factors are. The first 6 of these are:

All of these things aren’t just affecting our community and generation. The past has affected the community today and soon it’ll, unfortunately, affect the future generation yet to come. This may seem like not a big deal at first but if our community doesn’t wake up and realize the crisis of mental health caused by these stereotypes, standards, and expectations we will be among the chaos.

Perfection is a long overused term in the world. The definition has changed erratically throughout human history. The course that modern society has taken with this definition is far too unrealistic.

Through whichever approach that the community takes there’s always a counteract to it. Mariam Hammad, junior in Qatar, expressed that “Perfection in its literal meaning is being free of flaw. Nothing in this world is perfect and it never will be.”

She continued with, “Society feeds on the idea of perfection and coerces people into thinking they aren’t perfect because they are themselves. Thinking about it, society will only tell you that you will be perfect when you become the opposite of what you are and once you do, you still won’t be perfect because to be that you have to be the opposite of what you’ve become and that’s how you’ll find yourself in an endless loop trying to achieve perfection.”

Most of society will never be satisfied with everyone and those stereotypes were made to make people fit into a mold, that mold is the false image of perfection. High School is known for either being the best or the worst years of someone’s life. That mold is one of the most crucial causes that lead to insecurities.

Stereotypes in high school and throughout life are meant to label a person. Whether our community follows these labels or refuses them there will always be the debate of what perfection is. Imperfection is perfection in itself.  Communities can often be hypocritical about this topic by encouraging their youth to be themselves and apply variety but they also don’t do much when it comes to the bullies that want to shove everyone back into that mold.

Through the slight hypocrisy of communities, morals have changed throughout time. Sammar Hannawi, licensed therapist, expressed that “morals have always been a huge change in society…now more than ever.” Morals are one of the most important things that are being picked at. The standards of perfection or the molds of highschool’s standards are affecting the way everyone is expected to act.

Society has a habit of switching sides when it comes to change. The stereotypes tend to endorse that change as a bad thing and the positive things that come from the community counteract those reasons. People need to learn what questions to ask, when to ask them, and what they can do to contribute to the betterment of that change.

There are millions of questions that could be asked, why hasn’t the community done something about this before? Where did these stereotypes come from? Stressing about the why’s, when’s, and where’s from before will never do any good. What’s important is, what is the community going to do about it now? Our society has been avoiding this change for far too long.

There are limited choices on what one person can do to change an entire country’s mindset. Not everyone’s going to go along with this change, but that doesn’t mean that everyone else should as well.

“Everyone’s reality is different and as a community, we have to be empathetic of that…” advised David Bates, a middle school science teacher. This shows the simplest acts of kindness daily could help. Things like holding the door for a stranger who’s in a rush, complimenting someone who seems alone, etc.

Even take it a step further by standing up for someone who isn’t prepared to do it for themselves. Things like defending someone from a bully in the halls, breaking up an argument before it turns into a fight, breaking up a fight instead of pulling out your phone, reassure someone you know if you notice they’re insecure.

Through all of these things, don’t forget to take care of yourself. Just remember the golden rule, to treat others the way you want to be treated.

Doing all of these things may feel like not much but it makes the world a better place whether we realize it or not. Smiles and kindness are contagious. Our society needs a lot of work and with dedication, it’ll get there. “Society has only two sides, the supportive and the judgemental. The question is, which side are you as your own person going to be on? Like beyond social media and everything else.” suggested Emaan Beidoun, a freshman.

“Beauty begins the moment you decide to be yourself.” -Coco Chanel, French fashion designer.