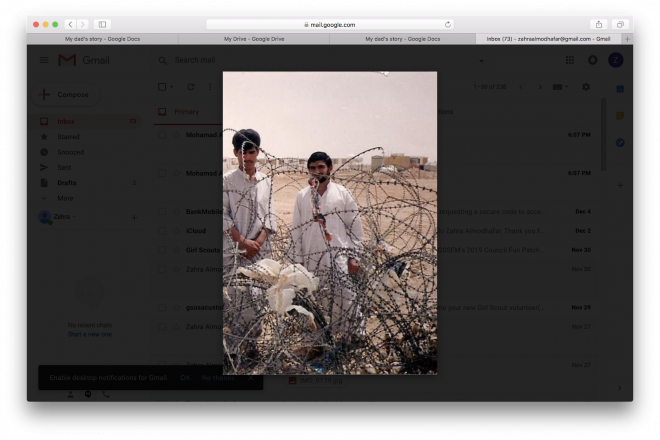 My dad, Modhar, is an immigrant. It all started from Saddam Hussein. The problem with Saddam was he wanted all the power. He was a dictator.

Since he wanted all the power he killed people. He didn’t only kill people in Iraq, he also killed people in Kuwait and Iran. So he basically wanted to rule the Middle East.

Because of all this, my dad and his group of friends escaped from Saddam. They went into the desert. They went far in the desert and they saw the U.S military. The U.S military captured them. They put them in a camp in Saudi Arabia.

The camp had about 30,000 people. My dad says, ”The camp was crowded and the people made it even hotter.”

All of the people in there escaped from the war. The Saudi army ruled the camp.

Saudi treated the camp roughly. It was dictation. The camp was like jail so they treated them like prisoners.

My father and his friends were all in one tent. They slept on the floor on rugs. There was no electricity. It was really hot in the summer. Modhar says ”The people made it hotter.” And it was freezing in the winter. The food that they ate was provided by the government.

After 4 years of basically jail under the rule of the Saudi army, the U.S decided to pull the prisoners into America. The plane ticket was paid by the U.S.

My father decided to come to Dearborn because there was an Arab community here. He came here and worked as a machine operator.

When he saved up he got married and had kids. He couldn’t go back to Iraq, his home country, because it was too late.

His kids were grown and he figured there was better education here. Modhar says to his kids ”I did all of this for you.” Now he only goes for visits.

I have lots of respect to the U.S military. They saved my father.