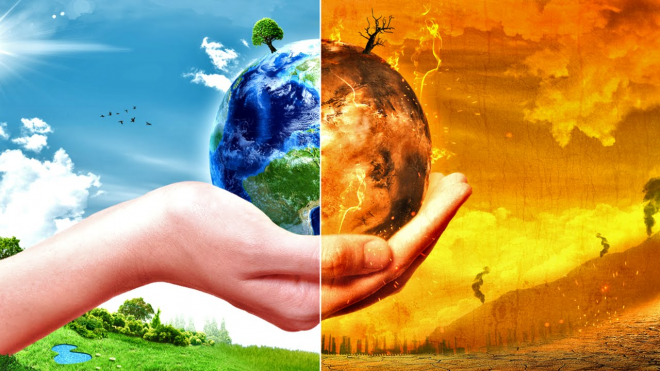 From 1800 till now Climate change has been getting worse. In 2017 157 million vulnerable people were exposed to heat waves globally and 153 billion hours of labor were lost due to heat exposure. Global warming is one of the aspects of Climate Change.

Scientist agrees that currently global warming is caused by the human growth of the Greenhouse effect. The greenhouse effect is when the sun’s warmth gets trapped in a planets lower atmosphere. Human activities have changed the natural greenhouse. Burning fossil fuels like coal and oil has increased the concentration of the atmospheric carbon dioxide. Certain gases prevent the heat from getting out. Nitrous oxide, Water vapor, Carbon dioxide, and Methane gases all contribute to the greenhouse effect.

The Earth will become warmer and some regions will get warmer than others. “It causes disastrous weather which is happening all over the world and the earth is getting warmer”, Ms.Lancaster says. Climate change has already had effects on the environment. Glaciers shrunk and ice on rivers and

lakes is breaking up early. Also plant and animal spans have shifted and trees are flowering sooner. Health issues like asthma, Lyme Disease, poison ivy, and allergies are also going around because of Climate Change. Also, some families are facing hurricanes and other natural disasters.

Ancient evidence can be found in ocean sediments, tree rings, coral reefs, and layers of sedimentary rocks. This evidence reveals that current warming is happening ten times faster than the average rate of ice-age-recovery warming. There are many solutions to climate change. An important solution is to switch to clean renewable energy sources. Also, you need to use energy more efficiently. “Everyone is supposed to do there part, you can do the simplest things, walk, ride a bike, and mass transit cuts down fossil fuels”, Ms.Lancaster says.

Trump administrations and auto companies are attacking current fuel efficiency standards. “It’s very important for the whole world to be on the same page, were all in this together. So much change is going to happen because of it. Trump wants us to keep burning coal, he doesn’t think its a problem, but it is”, Ms.Lancaster exclaims.

It’s “ not something that’s happening in 2050 but something that were already seeing today”, executive director of the lancet countdown Dr.Nick Watts says.