Swimmer Michael Phelps is one of the greatest Olympic athletes of all time. He has won 18 gold medals in his career. That’s more than any other Olympian. Michael Phelps also won more gold medals in one Olympics, eight in 2008, than any other Olympian in history. Michael Fred Phelps was born in Baltimore, Maryland on June 30, 1985. He has two older sisters, Hilary and Whitney, who also swim. Michael had ADHD (Attention Deficit Hyperactivity Disorder) as a child. His parents got him into swimming as a way for him to burn off some energy. Plus, his sisters already liked to swim. Michael did well at swimming from the start and was breaking records by the age of 10. He was only 15 when he qualified for the 2000 Olympics. Phelps’ great swimming ability is a combination of skill, physical ability, and hard work. Many experts say that Michael’s body was designed for swimming. He has a very long torso, long arms, big feet, and short legs for his height. His long arms and feet help propel him through the water and, at the same time, his long torso and short legs help him to glide cleanly through the water. Michael also has practiced and worked out for years to get into the kind of extreme shape it takes to win so many medals at a single Olympics. His intense focus and drive are legendary. 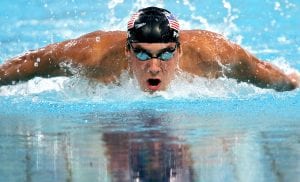 This entry was posted in Blogs. Bookmark the permalink.

By sparlaxy.de
Skip to toolbar