Students who studied for 20 hours through the personalized lessons on Khan Academy showed an average 115-point increase between their earlier and preliminary PSAT/NMSQT exam and the actual SAT that colleges use to help decide admission offers, according to a study from the two groups. That improvement was reportedly double the average increase of students who did not use the Khan tutorials. A perfect score on the two parts of the SAT would be 1600 total. 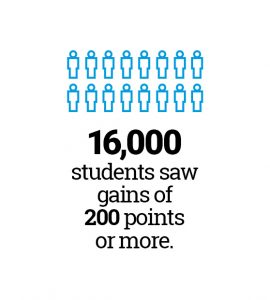 The United States has 88.8 guns per 100 people, or about 270,000,000 guns, which is the highest total and per capita number in the world. 22% of Americans own one or more guns (35% of men and 12% of women). America’s pervasive gun culture stems in part from its colonial history, revolutionary roots, frontier expansion, and the Second Amendment, which states: “A well regulated militia, being necessary to the security of a free State, the right of the people to keep and bear Arms, shall not be infringed.”

Proponents of more gun control laws state that the Second Amendment was intended for militias; that gun violence would be reduced; that gun restrictions have always existed; and that a majority of Americans, including gun owners, support new gun restrictions.

Opponents say that the Second Amendment protects an individual’s right to own guns; that guns are needed for self-defense from threats ranging from local criminals to foreign invaders; and that gun ownership deters crime rather than causes more crime. Read more background…