A California school district provides a case study in how to improve student writing across the curriculum.

Over the past several years, I have been fortunate to work with an incredible array of teachers from across the United States who have given me valuable insight into their professional challenges. For a while now, I’ve started each workshop by asking the same question: “How many of you are seeing a decline in your students’ writing abilities?” Sadly, no matter where I’m presenting or what the demographic of their students, the teachers’ responses overwhelmingly confirm my worst fears: Wide swaths of students are not developing their writing skills—skills we know to be foundational to their literate lives.

Why are writing skills in decline? To answer this question, one might start by reading a recent study of U.S. middle schools conducted by the Education Trust (2015), in which the researchers examined a key question: Do classroom assignments reflect today’s higher standards?

Their findings were sobering.

This lack of rigor was especially evident in schools’ writing expectations for students in middle school (see fig. 1). 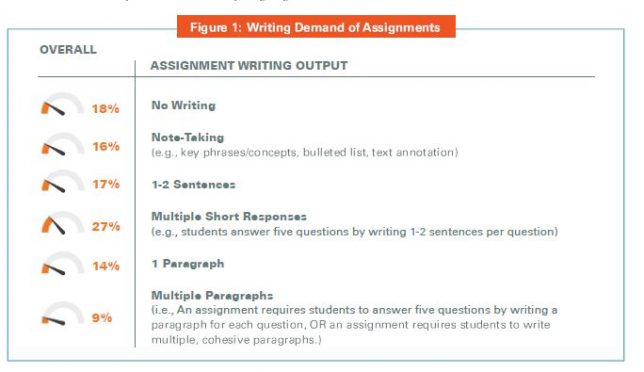 Fellow-countrymen: At this second appearing to take the oath of the presidential office, there is less occasion for an extended address than there was at the first. Then a statement, somewhat in detail, of a course to be pursued, seemed fitting and proper. Now, at the expiration of four years, during which public declarations have been constantly called forth on every point and phase of the great contest which still absorbs the attention and engrosses the energies of the nation, little that is new could be presented. The progress of our arms, upon which all else chiefly depends, is as well known to the public as to myself; and it is, I trust, reasonably satisfactory and encouraging to all. With high hope for the future, no prediction in regard to it is ventured. On the occasion corresponding to this four years ago, all thoughts were anxiously directed to an impending civil war. All dreaded it—all sought to avert it. While the inaugural address was being delivered from this place, devoted altogether to saving the Union without war, insurgent agents were in the city seeking to destroy it without war—seeking to dissolve the Union, and divide effects, by negotiation. Both parties deprecated war; but one of them would make war rather than let the nation survive; and the other would accept war rather than let it perish. And the war came.

One-eighth of the whole population were colored slaves, not distributed generally over the Union, but localized in the Southern part of it. These slaves constituted a peculiar and powerful interest. All knew that this interest was, somehow, the cause of the war. To strengthen, perpetuate, and extend this interest was the object for which the insurgents would rend the Union, even by war; while the government claimed no right to do more than to restrict the territorial enlargement of it.