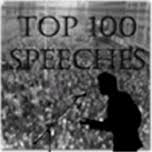 “Wellesley, you see, is not just a place but an idea — an experiment in excellence in which diversity is not just tolerated, but is embraced. The essence of this spirit was captured in a moving speech about tolerance given last year by a student body president of one of your sister colleges. She related the story by Robert Fulghum about a young pastor, finding himself in charge of some very energetic children, hits upon the game called “Giants, Wizards, and Dwarfs.” “You have to decide now,” the pastor instructed the children, “which you are — a giant, a wizard, or a dwarf?” At that, a small girl tugging at his pants leg, asked, “But where do the mermaids stand?” And the pastor tells her there are no mermaids. And she says, “Oh yes there are — they are. I am a mermaid.”

Now this little girl knew what she was, and she was not about to give up on either her identity, or the game. She intended to take her place wherever mermaids fit into the scheme of things. “Where do the mermaids stand? All of those who are different, those who do not fit the boxes and the pigeonholes?” “Answer that question,” wrote Fulghum, “And you can build a school, a nation, or a whole world.” As that very wise young woman said, “Diversity, like anything worth having, requires effort — effort to learn about and respect difference, to be compassionate with one another, to cherish our own identity, and to accept unconditionally the same in others.

And who — Who knows? Somewhere out in this audience may even be someone who will one day follow in my footsteps, and preside over the White House as the President’s spouse — and I wish him well.

You should all be very proud that this is the Wellesley spirit. Now I know your first choice today was Alice Walker — guess how I know! — known for The Color Purple. Instead you got me — known for the color of my hair. Alice Walker’s book has a special resonance here. At Wellesley, each class is known by a special color. For four years the Class of ’90 has worn the color purple. Today you meet on Severance Green to say goodbye to all of that, to begin a new and a very personal journey, to search for your own true colors.

In the world that awaits you, beyond the shores of Waban — Lake Waban, no one can say what your true colors will be. But this I do know: You have a first class education from a first class school. And so you need not, probably cannot, live a “paint-by-numbers” life. Decisions are not irrevocable. Choices do come back. And as you set off from Wellesley, I hope that many of you will consider making three very special choices.

The first is to believe in something larger than yourself, to get involved in some of the big ideas of our time. I chose literacy because I honestly believe that if more people could read, write, and comprehend, we would be that much closer to solving so many of the problems that plague our nation and our society.

And early on I made another choice, which I hope you’ll make as well. Whether you are talking about education, career, or service, you’re talking about life — and life really must have joy. It’s supposed to be fun.”