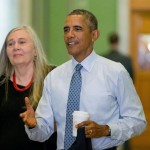 The president voiced his concern that fiction writers “have been overwhelmed by flashier ways to pass the time” in the second part of his interview with novelist Marilynne Robinson, which was published this week on the New York Review of Books website. The first part of the interview was published two weeks ago.

Obama asked Robinson if she was concerned that Americans don’t read enough fiction. “When I think about how I understand my role as citizen, setting aside being president, and the most important set of understandings that I bring to that position of citizen, the most important stuff I’ve learned I think I’ve learned from novels,” he said. “It has to do with empathy. … And the notion that it’s possible to connect with some[one] else even though they’re very different from you.”