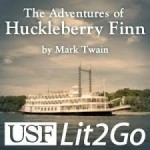 Lit2Go is a free online collection of stories and poems in Mp3 (audiobook) format. An abstract, citation, playing time, and word count are given for each of the passages. Many of the passages also have a related reading strategy identified. Each reading passage can also be downloaded as a PDF and printed for use as a read-along or as supplemental reading material for your classroom. 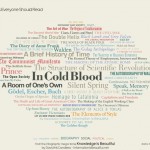 Just when you thought your to-read pile couldn’t stack any higher without toppling, designer David McCandless has created an infographic visualizing which nonfiction books most media outlets and awards panels recommend.

Nonfiction titles by literary fiction writers reign supreme, with Virginia Woolf’s A Room of One’s Own and Truman Capote’s In Cold Blood racking up the most references. Science-related titles appear prominently, too, including Stephen Hawking’s A Brief History of Time and Thomas S. Kuhn’s The Structure of Scientific Revolutions. And, in spite of pleas that its rules are no longer relevant, The Elements of Style appears nestled among the notable titles.

Courtroom sim covers ethics, the Constitution, and the art of argument