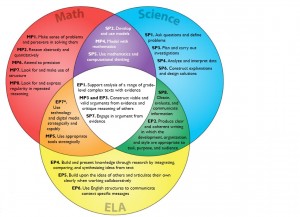 “With the common standards, there are changes in the content—it’s deeper, more focused—but it’s these practices I think that are going to move our students,” Cheuk said. However, she offers the caveat that the language used in the above standards can mean different things in different disciplines. For instance, evidence in science class is not the same as evidence in language arts. “It’s not perfect,” she said of the diagram. “It’s meant to start the conversation.” The diagram is not exactly new—it was last updated over a year ago. But I happened on it yesterday myself through the Tweet below, in which a self-described educator uses the diagram as an argument for more states to adopt the Next Generation Science Standards. So far 12 states and the District of Columbia have signed on to use the new science standards, which emphasize application, inquiry, and engineering design.