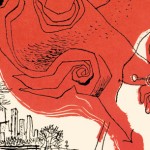 When I reread “The Catcher in the Rye” a few years ago, I was unmoved by the emotional ferocity that had enthralled me in 1974.

Halfway through the American classic “The Catcher in the Rye,” Holden Caulfield, the emotionally fragile teenage hero, who is by this point well on his way to a nervous collapse, finds solace in a visit to the Museum of Natural History in New York City, where he gazes longingly at the life-size dioramas of Native American life. What appeals to him isn’t anything anthropological; rather, it’s the fact that the “life” within the elaborately detailed displays is frozen — comfortingly, to him — in time:

“The best thing, though, in that museum was that everything always stayed right where it was. . . . You could go there a hundred thousand times, and that Eskimo would still be just finished catching those two fish, . . . and that squaw with the naked bosom would still be weaving that same blanket. Nobody’d be different. The only thing that would be different would be you.”